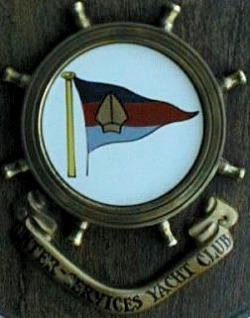 In march of 1958 the RAFYC and USSC decided to merge with the ISYC and the Club’s stone buildings and beach pavillion (Shahab Dins) were built. Membership was now over 100 and regular matches were sailed against the Kyrenia and Limassol clubs. It was in this year that during a passage sail to the Limassol regatta that an Albacore was unfortunately lost. 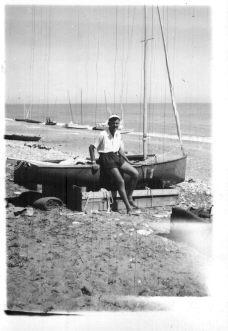 The first reference to what we now know as “Tunnel Beach” was made in 1959. Later in that year it was decided to supplement the starting gun with a bell, which hangs on the bridge to this day. Also in this year the club bought it’s first Terelene sails. In November of 1959 during a race to Evdhimou a Firefly was lost and as a result of this the club decided to purchase life jackets which were to be worn if the member was a “weak swimmer!”

In 1961 a competition was held for the heraldic design of a club flag. This was won by a Major Morgan and the design was subsequently registered with the RYA. It consists of Navy, Red and Sky Blue horizontal bands representing the three services, surmounted by a Bishops Mitre in recognition of the fact that the land the club sits on is owned by the Limassol Bishopric.

In the early sixties a number of clubhouse improvements were carried out including the addition of changing and workshop facilities. On the maintenance front bearing in mind all boats were at this time wooden hulls, Polyurethane Varnish was introduced.

In December of 1963 the first 4 Bosun dinghies arrived but proved to be so unpopular that by June the following year the club were trying to get rid of them. Then in July they swapped them for 7 Fireflies with DSC. In 1965 a new bar was opened and in December 1966 it was decided that ALL sailing members should wear personal buoyancy.

During 1967/68 considerable improvements to club facilities were carried out and these included extensions to the clubhouse and changing rooms, the building of the stone sea wall with the flagstone area behind and later the terratzo dance floor area. In November of 1968 the club decided to buy 4 505’s and 4 Lark dinghies. In 1971 the club gained recognition as an RYA training establishment (the only one outside the UK). Also the Denton Tankard was presented in memory of the late Major John Denton and was to be sailed for over a distance of 25 miles as a team event. By July 1972 it was decided to try and dispose of the Larks, they not being considered suitable for local sea conditions. By April 1973 the 505’s were becoming a financial burden for the club to maintain and it was decided to lay up 2 of them to try and keep the other 2 seaworthy. Eventually in October 1973 all 4 505’s were transferred to RAF Kai Tak where at least there were other 505’s to race against. In February 1975 the Larks were finally disposed of by transferring them to Gibraltar USSC. Membership at this time was down to 40 – 50 members due to the fairly large scale repatriations that took place as a result of the troubles in the north of the island. 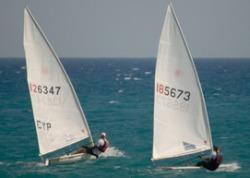 In 1975 the ASA took over sponsorship of the club from the RAFSA.; the glazed extention to the clubhouse was built and first references were made to the possibility of building a ‘Mini Mole’. The first mole (1976)consisted mainly of beach sand and shingle being bulldozed into a mole shape. In the following winter (1977) it was almost entirely washed away.

In June 1978 the mole was rebuilt, this time including a concrete slipway, but yet again the winter storms badly damaged it. This process of mend in the summer for the winter storms to break down went on till 1982 when it was decided to rebuild it using almost exclusively large rocks. This was far more successful but the winter still caused some damage.

It was also in 1986 that first mention was made of the suitability of Bosuns for training purposes and the first 3 (second hand) were eventually bought in 1987. These were supplemented by 2 new ones later on in the same year. These were further boosted by the arrival of 2 more new Bosuns in 1989. Also in 1989 Ladies Sailing Mornings were initiated and these have continued on and off until present times. 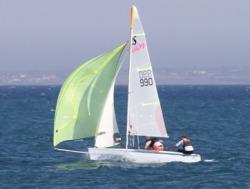 In November of 1989 the Army Sailing Association made 14 Kestrels available for use on the island and ISYC’s share was 6, with 6 going to DSC and the remaing 2 to MTW (Military Training Wing)

The Club elected to change its name in late 2007, from the ISYC to the Episkopi Services Sailing Club (ESSC) to emphasise that the club is for everyone serving within Episkopi, particularly families.

There is a small percentage of enthusiastic Ex Patriot members who bring a wealth of sailing experience and boat maintenance skills, in addition to providing some much needed continuity to the club.

In 2009 the club purchased 4 RS Visions to replace the aging Bosun fleet which was then sold to club members who have lovingly restored them.  The large fleet of boats within the club has changed over the years but now comprises of 7 Laser 2000, 8 Laser 1’s, 18 Laser Pico and a 3 Dart 16s.

Sailing instruction to the Royal Yachting Association (RYA) standard is available on regular courses for both beginners and the more advanced sailors.

Also RYA Power Boat training courses have proved to be very popular with some of our members both who have their own power boats for those calm mornings when water skiing or a trip down the coast to a local tavern for breakfast is the order of the day and for those wishing to help with safety duties and for experience driving on Club Sail-a-ways, Sunday Social Sailing and particularly helping during Sailing Courses. The current Power Boat Fleet consists of an Valiant 5.8m RHIB powered by a Mercury 115hp outboard, a Zodiac 5.4m RHIB powered by a 60 HP Mercury, a Valiant 5.4m RHIB also powered by a Mercury 60hp and our work-boat an Amathunta 180 with a 50hp Yamaha.

This site uses cookies. By continuing to browse the site, you are agreeing to our use of cookies.

We may request cookies to be set on your device. We use cookies to let us know when you visit our websites, how you interact with us, to enrich your user experience, and to customize your relationship with our website.

Click on the different category headings to find out more. You can also change some of your preferences. Note that blocking some types of cookies may impact your experience on our websites and the services we are able to offer.

These cookies are strictly necessary to provide you with services available through our website and to use some of its features.

Because these cookies are strictly necessary to deliver the website, refusing them will have impact how our site functions. You always can block or delete cookies by changing your browser settings and force blocking all cookies on this website. But this will always prompt you to accept/refuse cookies when revisiting our site.

We fully respect if you want to refuse cookies but to avoid asking you again and again kindly allow us to store a cookie for that. You are free to opt out any time or opt in for other cookies to get a better experience. If you refuse cookies we will remove all set cookies in our domain.

We provide you with a list of stored cookies on your computer in our domain so you can check what we stored. Due to security reasons we are not able to show or modify cookies from other domains. You can check these in your browser security settings.

We also use different external services like Google Webfonts, Google Maps, and external Video providers. Since these providers may collect personal data like your IP address we allow you to block them here. Please be aware that this might heavily reduce the functionality and appearance of our site. Changes will take effect once you reload the page.